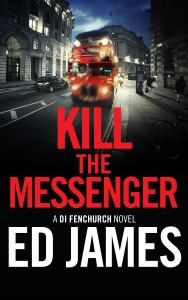 A brutal murder. A haunted detective. A case that unearths monsters.
When a young woman is killed, squashed between a London bus and a white van, DI Simon Fenchurch is called in to investigate, soon discovering the case has deeper roots than initially appears.
With new gangs wrestling to take over east London and a fresh wave of innocent victims exploited by new monsters, Fenchurch must work with old friends and new foes to unpick a web of lies and deceit.
As Fenchurch and his wife Abi struggle to reconnect with their daughter, Fenchurch comes face to face with his worst nightmare — the man who allegedly abducted Chloe eleven years ago, now out having served time for another murder. But is Fenchurch just playing to his own prejudices? Is he looking for the real killer? And will he have to pay a high price to catch a brutal murderer?
Available now from Amazon on Kindle (read for free using Kindle Unlimited) and paperback.
https://mybook.to/EJMessenger
And thanks for all of the support over the years — I couldn’t do this without you.
— Ed