Ed James Statistics for year one

Not quite a full year, given that I didn’t publish GHOST IN THE MACHINE until mid-April, but I thought I’d do a summary of the statistics that I’ve managed to acquire in that first year.  Bear in mind that I started with nothing but a book – I had no “author platform” and no big publisher’s marketing budget.  Everything I’ve done is off my own back – I could have used a lot of that time to write more, but I think I’ve got a good blend just now.  I’ve logged my sales on a weekly basis, though I check them hourly sometimes :(, and have done since day one.
So, where to start – ah, yes.

I’ve published 190,000 words over two books, plus I’ve written 82,500 of FIRE IN THE BLOOD.  That’s a shitload – and bear in mind that GHOST went through 9 drafts before I’d sorted it out, including at least two almost starting again, so there’s probably another 50,000 or so words that I’ve written and junked (though they weren’t this year!).  GHOST was picked up last Boxing Day at 55,000 words of a revised edit – I wrote another 20,000 to finish it then edited it furiously, adding another 12,000 words by the time it was eventually published.  Next year, I will hopefully exceed that with FIRE, DYED IN THE WOOL and BOOK FIVE (either DROP IN THE OCEAN or DEAD IN THE WATER)…

Okay, so I’ve had two books out for over two months now, almost three.
GHOST has been on sale for 37 and has sold 879 as of this morning – and that’s sales where people have spent money on my book (I’ll come on to freebies below).  I dropped the price to 77p in the UK and the sales have gone up a bit (with a staggered increase in DEVIL) but it’s too early to draw inferences from it.
DEVIL has been on sale 12 weeks (just shy of three calendar months) and has sold 246 copies.  Given that the price for that book is £2.95 (and equivalent), I’m gobsmacked by that number of sales.  If I’m ever going to make a living out of this, it’s selling at a high price that gets the bucks in – I’ve made £115 more from DEVIL than GHOST.  I’m pleased to report that the market does seem to support higher priced novels – the challenge I face next is how to get more people to read the first and then move on to others.  It’ll be interesting to see what knock-on effect publishing FIRE IN THE BLOOD in the next three weeks will have on the other two, if any, and whether it follows a similar pattern to DEVIL or dances to its own tune (bear in mind that DEVIL has a large cross-over with events in GHOST whereas FIRE is more standalone).

One thing that interests me is the number of channels an indie author can publish to these days.  There are a proliferation of eBook stores now – Amazon’s Kindle, Barnes & Noble’s Nook, Apple’s iBooks and others.  Smashwords is a useful service to get published on the non-Amazon channels as they aggregate and publish for you.
Also, as well as eBooks, I sell paperbacks through Amazon’s Createspace Print-on-Demand subsidiary.  It has picked up a bit recently (potentially because of Christmas) but I’ve sold a tiny fraction of my books there.
Anyway, enough chat – here’s a picture. 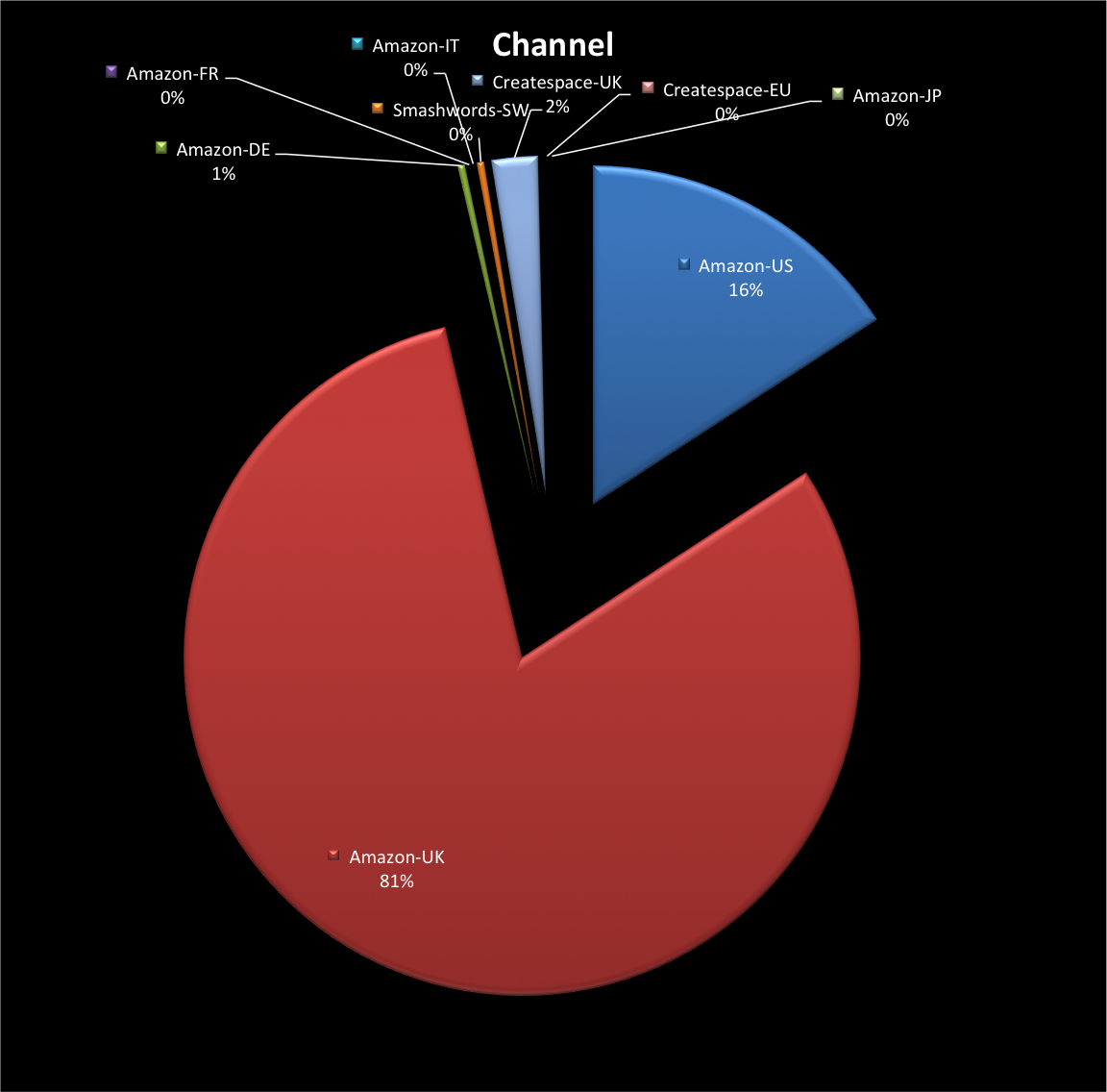 The conclusion is stark – Amazon is the only way to go.  Bear in mind that only GHOST is available on non-Amazon platforms, it’s quite alarming how many I’ve sold.  Smashwords itself hasn’t been a roaring success – I’ve sold more in Germany than on Smashwords itself – but I only managed to get through to their premium in December (and GHOST had been exclusive to Amazon for the three months prior to that), so perhaps I’m not an appropriate sample.  That said, tracking and analysing helps me work out my focus for the next activities…
Internationally, I’ve done well – the US has a strong market for Scottish crime fiction seemingly.  I’ve had some sales in Germany, Norway, Denmark, Italy, France and Germany, too.

I mentioned there that I’d been “exclusive” to Amazon for three months with GHOST.  What that actually means – and it sounds like I’ve got something from them – is that I’ve tied myself to them exclusively for a three month period and in exchange I get some additional promotion (and I’ve had emails from them advertising my own books!) and the ability to give my book away free for five days out of the ninety.  Now, I did that and to varying degrees of success.  I didn’t do this until September – I’d not proofed the book before publishing (lesson learned there!) – and so I’ve only done one set of promos.  The idea is that you give it away for a day or two and you get a sales spike afterwards from Amazon’s “people who bought this also bought” feature.

I gave it away in early September on a Saturday and Sunday.  I did no promotion on it at all.  It got to #10 on the overall Amazon chart (there are some fragments in Google still alluding to this) on downloads of 3,064.  The very next day I sold 89 copies, then 23 and then back to the usual, although it was slightly higher.

I had read somewhere that staggering it with a day inbetween is better as it gives you a spike day in the middle, so I tried that in mid-October.  Day 3 got me 1,020, more than Day 1.  But I didn’t get much of a spike the next day.  Day 4 only got 271.  If they’d been together, I would probably have repeated the same feat as Day 1 & 2.  Lesson learned there – don’t do that.

Day 5 was in mid-November.  I had a horrific flu bug but I had managed to preset some blog posts and so on.  This time I promoted it.  … and I had 214 downloads.  Hmmm.

I think from my experience, the magic of downloads giving sales spikes has gone.  I’ve given away 4,569 books and I imagine that they’re sitting in an unread folder on most of these people’s Kindles.  I have had some nice comments from some freebie readers who’ve gone on to buy DEVIL, but I’d say that this trick has very much had its day.  My 77p price reduction has had a more positive impact – these are people who are committing to your work and generally seem to buy the second book.

I love social media.  Okay, I love Twitter.  Facebook disturbs me in a way I can’t effectively describe – maybe I just find it banal.  Anyway, if you want to chat to me, chat to me on Twitter.  Some social stats – 6,063 Twitter followers, 83 wordpress subscribers, 66 newsletter subscribers, 40 likes on Facebook.
Twitter has been great.  I’ve met so many cool and deliberately uncool people on there, and people who love my book, but also people I’ve connected with – I don’t know if friend is the right word, but people I share serious and unserious banter with.  I’d recommend it to any aspiring author, it’s the place to interact with your readers and it’s given me some good insights into my “author platform” – I’d say about 75% of my readers are female, or maybe just the ones who chat with strangers on the internet (hmm, I’m sure there’s a story in that).
I think next year, I need to focus on Facebook more.  My natural aversion to it – Facebookaphobia? – needs to be overcome!

In summary, it’s been quite a journey in eight months going from nothing to all of that.  I’ve learnt some tough lessons along the way – I’m paying a proof-reader for FIRE IN THE BLOOD – and I’ve made some good cyberfriends.  Most of all, I’ve really enjoyed writing it all.  Bear in mind that, except for some time at weekends, 80+% of my writing is done on a train commute on my now trusty MacBook Air (and the old netbook, Newton rest its operating system).  That’s a heck of an achievement – I just hope I’m not damaging myself by working this hard…
Now, back to the editing of FIRE IN THE BLOOD.
— Ed
Buy GHOST IN THE MACHINE (Scott Cullen book one) –
UK Kindle 77p – http://amzn.to/Ih2ros
US Kindle 99c – http://amzn.to/IzknfQ
other channels are available