I’ve been experimenting with using multiple sales channels over the last few months.
Previously, I’d found that Amazon was >99% of my sales figures though, curiously, 85% of my free downloads. I wanted to see if that 15% would turn into sales on the other channels. Also, I get occasional posts, tweets and emails about whether I’ll put my books on Kobo/Nook/iBooks/etc.
Well, I tried. Put it this way, having had the books out there for seven weeks now, I’ve realised I sell 2.5 times EVERY DAY on Amazon what I’ve sold in that period across Kobo and Nook. Say what you like about Amazon, they really have created a market for indies like me to exploit and create a career out of.
So, I’m going back all-in with Amazon ‘s KDP Select as of next Wednesday, 07-May. For all those who’ve contacted me asking for the other Cullens on non-Kindle platforms, you’ve got a week to get the books.
In all seriousness, if you read books on your tablet (iPad, Fire, Nook Colour, etc) then I recommend you get the Kindle app for my books. It’s really good. I’d also advise against reading on a tablet – your eyes’ blink reflex is deadened compared with paper or eInk so you get dry eyes. As someone who’s had laser surgery on my ‘een’, I’m acutely aware of how bad my eyes feel when I’ve beasted my iPad for a long period (most recently reading twenty issues of CAPTAIN AMERICA back-to-back on Comixology…) I’m not a professional but speak to your optician if you get pain or dry eyes – don’t mess with your eyesight.
In other news, I’m just about finished Draft 1+ of SNARED, DS Dodds book one. I say 1+ and that means I wrote it last week and I’m firing through it to fix errors and stop things like summary narrative which is something I’m trying to kill in my books.
There’ll be a mailing list entry in the next couple of days, so sign up!
— Ed

Kind of spooky in the week GHOST hit 666 reviews in the UK, but a few things on CULLEN book two – DEVIL IN THE DETAIL.
If you’ve bought it, you should have received an email from Amazon yesterday saying a revised version was uploaded. This is fact. There’s also a revised version of GHOST IN THE MACHINE uploaded as well.
What sort of revisions? Well, one of the big things I’ve done this year is edit the first two novels so the writing is consistent with the later novels – my style has moved on a lot. With GHOST and DEVIL, I went through them several times and tidied the text up significantly. The changes were read by Rhona, who edited DYED IN THE WOOL and BOTTLENECK, and those two books are now as good as I can make them without starting again from scratch (seriously, don’t tempt me).
The bulk of the changes are stylistic – removing info dumps (bad), heavily-reducing the Scottish patois (no kens, didnaes and all that), cutting Bain’s swearing a bit (he’s still a profane idiot), heavily-reducing the dialogue attribution (I was a bit worried about people getting lost in dialogue, so every line had a said) and tidying up a few bits and pieces. There was a lot of descriptions of roads which really added nothing to the books – I should really write THE ED JAMES GUIDE TO THE SCOTTISH MOTORWAY SYSTEM (INCLUDING DUAL CARRIAGEWAYS AND SIGNIFICANT A-ROADS).
The significant changes to GHOST were the complete rewrite of the first scene and addition of a cold open scene in Pilrig Park, foreshadowing a bit of the ending. Nothing major, really. The word count went from 96,000 to just under 87k.
DEVIL was squashed into two calendar days and I’ve thinned the action on day two out into a third one, adding a nice scene with Sharon McNeill. There’s also a bit of a ticking clock that was in there which I’ve picked out of the mix and made more explicit. At least two of the scenes got really major rewrites. The word count was sliced from 103k to just over 86k and it is a lot slicker for it.
I don’t know if any of your ever have any plans to re-read the books (I think TRAINSPOTTING and THE CROW ROAD are the only novels I’ve read more than once…), then do me a favour and read these ones. Spending that amount of time putting sheen on a free book was a labour of love, really.
In other news, DEVIL is now out on Kobo and Nook. I’m experimenting with non-Amazon channels for the Cullens just now (I’ve had >30,000 GHOST downloads on these two) but I’ve been a bit underwhelmed by sales so far, shall we say. Say what you want about Amazon, their KDP offering for indies like me is second-to-none.
— Ed
Keep an eye on the mailing list – http://bit.ly/EJMail – to keep up with my release schedule.

I’m not all about Amazon. Mostly, but not all. I’ve put BOTTLENECK on Nook and Kobo right from the off –

Getting some very positive feedback on BOTTLENECK, which is a blessed relief more than anything. Oh, I was on the cover of Monday’s Herald.

To find out about my upcoming releases – sign up to the mailing list. I usually pre-release the book by this means, so it’s the best way of keeping on top of my books.

In other news, I’m just about ready to start the first draft of SNARED, the first DS DODDS mystery. 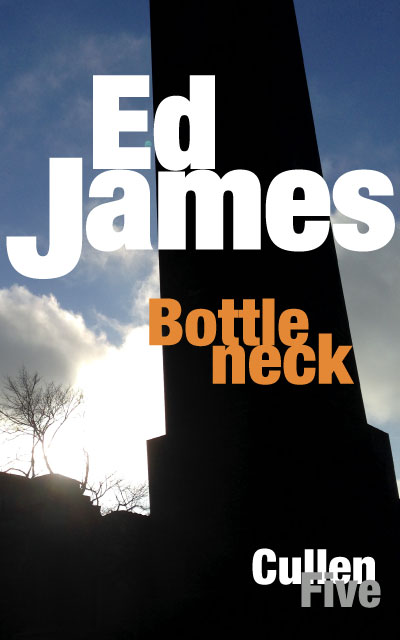 BOTTLENECK is officially out today on Kindle and Kobo for £3.99 and $6.49 (other channels, including paperback and Nook will likely be 31-Mar-14) –
Kindle –
Amazon UK Link
Amazon US Link
(other territories live now)
Kobo –
Kobo link
Hope you enjoy it! First chapter is just after the break.
— Ed
Join my mailing list